The perched villages of the Luberon

Written by Emily Durand. Posted in Off The Beaten Path, Provence History

From valley to hilltop in the Luberon The Automne colors were just starting to turn when I had the privilege to take Larry and Kathy on a tour through the Luberon valleys and hilltops.

From their hotel near Gordes, we ventured to the first village just 10 minutes away.  Oppede-le-Vieux. Why “Vieux” (which means “old”)?  Yes, most things are “old” in France but here it is to distinguish between the newer village of Oppede, established in the valley in the early 1900’s for more space, easier access to water and to cultivate gardens.  Funnily (smartly) the inhabitants took off their roofs before descending not to pay taxes on two properties.

At the top we were pleasantly surprised by a man working behind a gate gathering rocks and sorting them into different piles.  Curious, we asked if we could enter. We learned that the chateau, first constructed in the 13th c. on the grounds of Gallo-Roman remains, is the last sight in the Luberon to be restored.  Based on experience from other sites being restored, this reconstruction period will last around twenty to twenty-five years.  Here are a few exclusive pictures from the chateau ruins normally closed to visitors.

On our way back down, Larry and Kathy had the good idea of sitting down at the Petit Café for a drink.  The Provencal lifestyle is not so difficult to acquire! 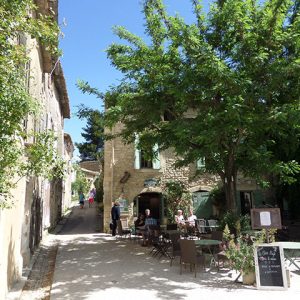 Next destination, Menerbes.  Legend says that Nostradamus nicknamed this town “the ghost vessel” after it’s long ship-like layout on a hill.  The town’s name first appeared as “Menerba”, a roman goddess of wisdom – in 1081.  During the Wars of Regligion, when it was beseiged by Catholics for 5 years ( 1573-1578), the Protestants, referred to as the Vaudois in the region, seemed to survive throug secret passage ways used to get supplies.  That is, until they reluctantly surrendered on December 9th, 1578.

Some say Menerbes became the jet-set of the Luberon: Pablo Picasso bought his mistress Dora Maar a house here, famous artists such as Nicolas de Stael and Joe Downing were residents (along with Peter Mayle who wrote A Year in Provence).

En route to Lacoste, we stopped at the Abbey Saint-Hilaire (a privately owned Historical Monument). Larry and Kathy mentioned that they were getting a little tired of visiting churches but were pleasantly surprised by the simplicity and unique architecture of this former Carmelite convent developed around 1250 on a pre-existing religious site.  I also got a great shot of them with the Luberon valley that I am sure they will enjoy for years to come (see photo at the top). 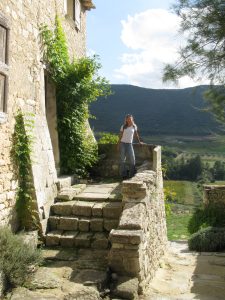 Your guide (me) at the Abbey Saint Hilaire

As we started our climb to the top of Lacoste through the winding cobblestone streets, I asked Larry if he had ever heard of the Marquis de Sade.  “Of course!” he replied.  I laughed as many know that he was quite the rebel.  Chateau de Lacoste was a place of “refuge” for  the Marquis de Sade from 1769 to 1772. “Refuge” since he was, more often then not, in flight to avoid incarceration.  His longest stay was in 1772, after escaping during a prison transfer.  During this time he built a theatre in his castle (wikipedia).

View of Bonnieux from Lacoste

The castle is was purchased by Pierre Cardin in 2001.  His extensive renovations coupled with modern art displays and a summer musical  festival have brought Lacoste prestige recognition.  It is also interesting to note that the village hosts students from Savannah College of Art and Design – it is thus quite common to hear English when roaming the cobblestones…

At this point, my guests, Larry and Kathy had fully experienced the climbing involved in visiting the Luberon Perched villages – all in one day.  It was time to let them retreat to their peaceful bed and breakfast.  However, we all agreed that a stop to marvel at the 3rd century Roman built bridge was a must!

The Pont Julien facilitated travel along the Roman Road (Via Domitia) connecting the Alpes to the Pyrenees. Erected between 27 BC and AD 14 for travelers to cross the Calavon river near Apt, it stayed in service for over 2000 years.  It wasn’t until 2005 that cars were no longer allowed to cross over!

During those days of routine back home when your soul is longing for a little adventure and an escape, just stop and retrace those magical beauties and wonders that you journeyed in Provence…until next time!